The Angora rabbit will always stand out due to its thick fur, which makes it look more like a big fluffy ball. We can find it in different colors or straight white. It is often chosen as a pet rabbit for children, especially because of its gentle and docile character.

The Angora (Ankara) breed, originally from Turkey, is considered to have been among the first domesticated rabbit breeds hundreds of years ago. They are believed to have been brought to France in 1723 from the Black Sea region. In 1777 they were exported from England to Germany.

How Much Does an Angora Rabbit Cost?

The amount of money you are going to spend on an Angora rabbit will be influenced by several factors such as the place you adopt it from, the age, the quality, the gender, and the breed. However, the average cost of an Angora rabbit would be anywhere between $75 and $240.

For instance, at the time this article was written there were many listings on the Hobbly website with prices starting at $75 and going up to more than $250.

According to Burke’s Backyard, the average cost of an Angora rabbit is anywhere between $55 and $80.

You might also like our articles about the cost of flemish giant rabbits, lionhead rabbits, or dwarf bunnies.

The Angora breed has four major divisions worldwide: the first subspecies is the English Angora rabbit, raised mainly as a pet, then we have the French version, for which wool is the keyword. Then there is the Angora satin breed, which has a thick fur, extremely valuable, then the German breed, which is used mainly for fiber production.

The wool of these bunnies is highly sought after all over the world, especially by textile companies. The thread is soft and fine, so it is used in many garments. The length of an Angora rabbit woolen yarn can reach 15-17 cm. You may or may not believe it, but the fur of this breed of rabbit is up to 6 times warmer than sheep wool fiber.

In case you are not able to purchase your Angora rabbit from a local pet shop, you will have to budget for delivery fees. This cost will depend on the distance that has to be traveled and the mode of transportation. The average cost of shipping would be around $120. Besides this shipping fee, you may have to pay another $45 to $70 for an airline-approved crate.

Although the beauty is largely due to the rich fur, their coat can be an enemy of Angora rabbits. If left uncared, it can cause respiratory or intestinal blockages due to inhaled or engorged hair. They should be combed daily (with a brush or a special glove) to remove loose hairs that could be swallowed. Brushing is very important, as it prevents possible dermatoses or the appearance of parasites, such as ticks. Plan on spending anywhere between $55 and $120 for the grooming supplies.

As the fur makes it very easy to collect the excrement and dirt around it, the cage must have a drainage system. There are several variants of such cages: some with a double bottom and a collecting tray, others with a wire floor (care must be taken that the meshes are not too large so that the rabbit can catch its feet in them). The cage must be large enough for the rabbit to move freely. Plan on spending only around $35 for a cage if purchased at a local yard sale or a couple of hundred dollars if you want a customized cage.

Angora rabbits eat fresh fruits (apples, pears) and vegetables (cabbage, carrots, beets), greens, and various cereals (corn). They must not be left without water, which must always be fresh. The average cost per month for the rabbit’s food would be around $30. 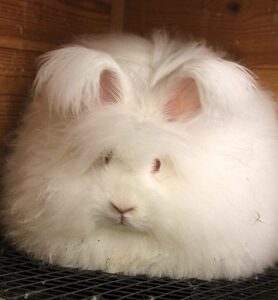 Angora rabbits under 3 months of age cannot be considered for purchase. Usually, it is not until the end of the lactation period that the breed and gender characteristics appear exactly, and the physical and emotional connection with the parent ends. And most importantly, the bunny is already eating adult food.

Always buy such a rabbit from a licensed breeder, and ask to see their parents, to make sure you bought a healthy Angora and not a regular rabbit or one with certain genetic conditions. Avoid rabbits of uncertain origin and sellers who are reluctant to give you details about care or parents.

If you leave it free in the house, you must cover all the electrical cables or hide them because they like to gnaw on anything. You shouldn’t be surprised if you find a few crumpled pieces of furniture.

Take into consideration checking a local animal shelter or animal rescue center to see if you can find a rabbit for adoption at a low cost. However, it may be pretty hard to find an Angora rabbit.