Regardless of what sports you’re into, you’ve definitely heard of Conor McGregor at least once. Aside from his sporting achievements, the fact that he managed to put MMA in the global spotlight is probably the Irish superstar’s greatest credit.

Conor McGregor is the first simultaneous double champion in UFC history, winning the Featherweight and Lightweight belts after defeating Jose Aldo by knockout in just 13 seconds and destroying Eddie Alvarez in the second round of their fight.

What is Conor McGregor’s net worth?

Conor McGregor is a famous Irish professional fighter with a net worth of $200 million at the time this article is written.

Conor McGregor was born on 14th July 1988 in Crumlin, Dublin. He was passionate about sports since childhood, but his first love was football. In fact, he was registered at the Lourdes Celtic Football Club. When he was 12 years old, he started going boxing, at a gym near the house.

These were the first steps taken by Conor McGregor toward a spectacular career that brought him many moments of glory, but also controversy.

McGregor later revealed that his family did not support him in his pursuit of a career in MMA.

“I had problems with my father, he told me to get a job, that I’m not doing anything with my life. They asked me what I’m going to do when I lose a fight. I told them that I’ll be a millionaire by the time I’m 25. My dad laughed in my face. It was a year late, but I made it.” said McGregor.

Until the time he got to the million dollars fights, McGregor started from the bottom. In fact, in 2006 he moved with his family to Lucan, Dublin, where he was an apprentice plumber. But he was lucky enough to meet Tom Egan, the first Irish fighter in the UFC, and the two started training together in MMA.

You might also like our articles on the net worth of Floyd Mayweather, Logan Paul, or Simone Biles.

Thus, McGregor’s debut in MMA occurred in 2007, in Dublin. Then he beat amateur Kieran Campbell by technical knockout. Immediately after this fight he signed a professional contract and was coached by John Kavanagh, who was the president of the Irish MMA Federation.

March 9, 2008, is the date the Irishman made his professional debut. He picked up a second-round TKO victory over Gaty Morris at lightweight. After another success with Mo Taylor, came the first loss against Artemij Sistenkov in the featherweight category. He made a successful comeback against Stephen Bailey, but then considered retiring. But he was turned away by the coach and his mother, who began to believe that her son would have a successful career.

Then, between 2011 and 2012, he won eight consecutive fights and became the CWFC (cage fighting) champion in the lightweight and featherweight categories, the first European to do so.

Although he was a good fighter, McGregor had financial problems. So severe that he received unemployment benefits, around $200 per month. However, things have changed since 2013 when he entered the UFC universe.

The lightning rise in the UFC

His rise in the UFC has been lightning fast. In 2016, the Irishman became the first UFC champion in two different categories at the same time. However, he suddenly announced his retirement from MMA. He made a change, and on August 26, 2017, he had a boxing match with Floyd Mayweather Jr. However, the Irishman was knocked out by technical knockout in the tenth round.

In October 2018, he returned to the UFC but was defeated by Khabib Nurmagomedov in the UFC lightweight title match. Later, in March 2019, he announced his retirement again, but a few months later he returned and defeated Donal Cerrone in just 40 seconds, at the welterweight. He thus became the first fighter with knockouts in the lightweight, featherweight, and welterweight categories.

On June 6, 2020, the Irishman announced his retirement again, for the third time in his career. He returned in January 2021 when he was defeated by Dustin Poirier. Even though the Irishman was defeated, he walked away with a large amount of money after this match. Specifically, MacGregor received a salary of $5 million. 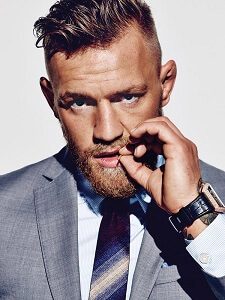 It was the second most watched fight in the world, which was eventually won by Floyd Mayweather with a technical knockout, achieving his 50th victory. However, Conor proved his boxing skills in the ring and managed to last 10 rounds. This fight attracted 4.3 million fans who purchased a PPV subscription online. Total revenue reached $550 million. But what about the earnings of the main stars of the show?

The amount guaranteed before the start of the fight was $100 million for Mayweather and $30 million for McGregor. In the end, however, both got much more than what was initially agreed upon. Thanks to flexible returns, boxing champion Mayweather increased his account’s worth by $275 million. According to Forbes magazine, the Irish MMA superstar collected about $85 million. Floyd Mayweather received more because he also played the role of promoter of the fight.

Conor McGregor is known for his vulgar vocabulary, which he often uses toward his opponents. Sometimes he can’t even control his explosive temper, which led him to attack the bus of his opponent, Khabib Nurmagomedov. After which he surrendered himself to the police and the whole incident ended up in court.

The Irish fighter was found guilty of several violent crimes. He had to pay for damages and do 5 days of community service. He was also forbidden to approach the two fighters on the bus, and for several days he took a self-control course.

Businesses and other interests

In addition to his rich and controversial UFC career, Conor McGregor is also known as a successful businessman. In 2018, he founded his own whiskey brand, Proper No. Twelve, which has sold over 6 million bottles since launch. The Irish fighter then cashed in a handsome check for selling his majority stake to Proximo Spirits for an incredible $600 million.

Conor also became known as a lover of fashion, especially suits. He has an interest in his luxurious style and whenever he goes out in public, he wants to be presentable. He is also a fan of tattoos, which cover many parts of his body.