Like any construction, yurts can be traditional, modern, or even luxurious. The most successful are the modern ones whose structure is according to the traditional type, but instead of felt for their covering and insulation, quality waterproof textiles are used, which ensure not only insulation but also waterproofing. Also, the useful space of the interior can vary depending on the diameter and height of the yurt. It is certain that yurts have come to the attention of those who are looking for affordable solutions for a home or in tourism, as accommodation.

How Much Does It Cost To Build A Yurt?

The cost structure for a yurt is totally different than those for a traditional house, as this is a semi-permanent structure. Usually, it does not involve infrastructure costs such as electricity or plumbing. Though, if you want to build a permanent yurt, then the cost factors will be the same as for traditional house construction.

The construction of a yurt is different from that of a traditional house because it has an innovative design and uses alternative materials, fewer than a normal building will need. It can even be delivered as a kit. For instance, a yurt supplier lists the standard characteristics like rain diverter, lattice walls, top cover, rafters, fabric windows, center rings, side covers, doors, tension cables, dome, and others. This is totally different from a traditional house.

You might also like our articles on the cost to build a pool house, a detached garage, or a brick house.

So, the main factors that affect the cost to build a yurt are the location, how difficult it is to deliver the kit components or materials, the cost involved with the foundation (known as the platform), and whether any infrastructure is installed. The infrastructure may refer to the excavation and septic installation, interior plumbing, running electrical supplies and systems, and others. The costs for all of these may vary based on several factors and have to be included in the final cost.

The price estimates we presented above do not include the costs of local licensing and permits.

The cost of a yurt may increase if you want to add extra features such as glass windows, water management systems, flashing for pipes and stoves, solar components, awnings, heavier doors, and insulation.

But what is a yurt? 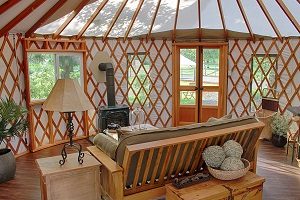 It is one of the oldest types of dwellings, recorded by Herodotus, the father of history, as typical of the Scythians, a nomadic people that lived between the Northern Black Sea and Central Asia. We know yurts as the traditional dwellings of the Mongolians, a country where temperatures drop to -86 degrees Fahrenheit and where the wind blows hard, which means that the average summer temperature does not exceed 68 degrees Fahrenheit.

Historians claim that these yurts would have been decisive in the flexibility and migration of the Mongols, who conquered vast territories in the 13th century and ended up having their own empire. Ok, now the world isn’t nomadic these days, but it seems that this kind of housing can be adapted for both mountain and seaside areas.

How long does it take to build a yurt?

Although it seems simple, the door frame, as well as the cut of the insulating materials, are not simple at all. Without the manufacturing part, the assembly process takes about a week. And yes, a straight platform is necessary, preferably a wooden one.

Being from the category of temporary housing, you normally do not need permits for building a yurt. But the situation changes when you make a platform for it. For this, you need approval from the local authorities.

A free-standing yurt can be installed by yourself and the cost will be almost the same as those presented above because the infrastructure is not included.

The yurt is designed so that it can be dismantled in large pieces, transported, and rebuilt in a new location.

So, the yurt is suitable for those who like change, nature, and freedom of movement, but also for those who want a nice nest for the family or for the holiday home, camping, festivals, and the like.