Jojo Siwa – dancer, singer, successful entrepreneur, and social media influencer, all at just 18. With a dancer and dance instructor mother, it’s no wonder that Joelle Joanie also developed a passion for dance. But she wanted to accomplish more than her own mother, and her childhood dream was to become famous and get rich.

What is JoJo Siwa’s net worth?

At the time this article is written JoJo Siwa has a net worth of $20 million. She became known for her appearance in the shows “Abby’s Ultimate Dance Competition” and “Dance Moms”, but became really successful with her YouTube videos. She has hundreds of millions of views for most of her videos, with more than 12 million subscribers.

JoJo Siwa, by her real name Joelle Joanie Siwa, was born in Omaha, Nebraska on May 19th, 2003.

JoJo Sia is the daughter of a dance teacher and developed a passion for dance from an early age. As a child, she participated with her mother in several dance competitions and did very well, winning important prizes. But her fame is due to the show Dance Moms, where she appeared for two seasons.

At the age of 9, JoJo entered a dance competition with her mother and, although she was the youngest contestant, she made it to the top 5. She also participated in a second season and as she became more and more popular, it was clear that it had to increase.

You might also like our articles on the net worth of Jake Paul, SssniperWolf, or Khloe Kardashian.

So, she created her own YouTube channel, and since then she has reached over 12.2 million followers on this platform alone. In fact, YouTube was her big launch pad, and when JoJo took the next step and released her first singles, “Boomerang” and “I Can Make You Dance”, things evolved extremely quickly. The songs became hits among teenagers almost overnight and showed the need for young people to be understood and helped.

The lyrics of the Boomerang song talk about bullying and cyberbullying and convey the message that bullies all over the world must be defeated. The clip has almost 960 million views and shows once again how serious this problem is among young people and how clear and committed measures are needed.

JoJo was 13 years old when Caryn Sterling, a businesswoman who had launched her own line of jewelry, proposed to advertise it among her fans. She didn’t offer her money in return, but something that would become much more valuable in a very short time.

And JoJo told her: she wanted fame and a lot, a lot of money. Her new manager quickly realized how she could make Jojo fulfill her dream – she needed an association with a famous, trusted brand that would give the teenager the visibility she needed. The Nickelodeon television station was chosen, and the payoff was enormous for all parties involved. The young woman made her debut in the films produced for children and teenagers and at that point celebrity was already achieved. 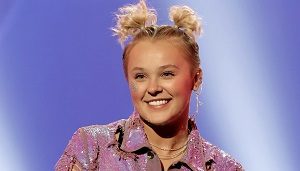 JoJo would make really big money from the businesses she was going to associate with her own brand. And they are not few at all: clothes, shoes, accessories, toys.

It all started with bows. So far, she has sold over 80 million pieces. And a JoJo bow costs between $5 and $16. If we take into account the minimum price, this results in receipts of $400 million. No wonder that JoJo Siwa brand is currently worth more than $1 billion, and the 18-year-old’s assets are worth more than $12 million.

This even despite the scandal that could have brought her bankruptcy. In 2019, she was accused that one of the makeup sets produced by her contained asbestos, a carcinogenic substance. Immediately the product in question was taken out of production. JoJo came out to announce this, as well as the fact that the safety of the users is the most important.

The scandal did not seem to influence the popularity of the teenager, so in 2020 her name appeared on the list of the 100 most influential people in the world, made by Time.

JoJo Siwa purchased a house in the LA suburb of Tarzana, California in February 2020 for $3.5 million. At that time, she was only 16 years old and had more money than most of us can earn in a lifetime.

Obviously, such titles and earnings require a lot of work and continuous presence on social networks. So, after her success with YouTube, Instagram and Facebook accounts, she also made a TikTok account, at which point the number of followers she had exploded. More than 40.3 million people watch the young woman’s videos and interact just as well whether she is dancing, singing, showing them her house, or preparing for concerts.

And the confession, a year ago, that she is a member of the LGBTQ community was received equally well by her fans, whether they are part of the same community or not.

For some, it was an extra impulse to talk about their experiences in the same sphere, for others, simply a satisfaction of the fact that the young woman is not afraid to be sincere about what she feels.