The automotive development process has never been left behind. The parts have always changed and improved. Engines of the V8 class came into the world thanks to other low-power engines and took their place honorably in the automotive industry.

The appearance of V8 engines was preceded by the fact that before them there were in-line engines, which did not differ in terms of high traction power. The first V8 engine was designed and built in 1902 by the designer Léon Levasseur, who designed and developed engines for ships as well.

How Much Does A V8 Engine Cost?

Like any other car part, the cost of a V8 engine will be affected by several factors such as the make and model of the car, the place you buy it from, and whether it is brand new or used. For example, you will have to pay around $3,200 for a used V8 engine, while the price of the new one is around $7,500. For luxury models, the costs can be even higher than $50,000.

Though, you may be able to save some money if you choose to install the V8 engine yourself as the labor costs are thousands of dollars. For instance, the labor fees are anywhere between $55 and $110 per hour.

As a result, most of the car owners choose to purchase a new V8 engine instead of overhauling it. The cost of the engine plus the labor costs may surpass the price of a brand new V8 engine.

In the table below you will find the average costs for replacing, respectively rebuilding a V8 engine for some of the most popular car models.

The V-piston engine is one of the most popular engines these days, after the in-line engine. They can be V4, V6, V8, V10, V12, or V16 engines. A V engine is characterized by two rows of V-shaped pistons, positioned at 60 or 90 degrees, each with its own cylinder head.

You might also like our articles about the cost of Chevy Tahoe engine replacement, engine reboring, or engine swap.

This arrangement cancels the up-and-down movement of each piston, which gives it stability. Additional cylinders provide more performance, but the compartment must be spacious enough to accommodate them. V-type engines are more common in performance cars and large diesel vehicles such as SUVs and trucks.

What is a HEMI engine and how does it work?

The Hemi engine as we know it from American cars was developed in the 1950s in the yard of Chrysler. The Americans named every car equipped with such a high-performance engine, whose power came from this innovation of the combustion chamber, a Hemi.

The name Hemi comes from Hemispherical. And, as you have already realized, it is about something round. A Hemi engine has a concave cylinder head combustion chamber. That means it is “hollow”, as opposed to a regular one which is straight. In a Hemi engine, the pistons are different. If in a normal engine, the upper part of a piston is flat, in Hemi the pistons are convex.

The main advantage of a Hemi combustion chamber is the increase in power at high rpm.

The brand that has promoted Hemi engines the most is Chrysler. In the 1950s, they made such engines for Nascar and later equipped various models in the range with V8 engines with hemispherical combustion. Among the most famous cars are Dodge Challenger, Plymouth Barracuda, Dodge Charger, Dodge Dart, and so on. Other American manufacturers of cars with Hemi engines were Ford and Chevrolet, who offered this engine as an option on the sportiest models in the range. 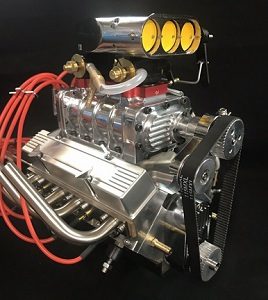 When looking for a new engine for your car, you may want to know what is the difference between a V6 and a V8 engine and what are the pros and cons of each of these.

One of the greatest advantages of a V6 engine is the fuel economy. Also, they can be better handled and are more stable.

The 8-cylinder engine will be your best choice if you want more power and acceleration and this is the main reason why these engines are more suitable for muscle cars.

V8 engines will be the best for you if you use your vehicle for hauling and towing. It has more stable power. You can feel the power and strength coming from the motor even if you gently press on the accelerator.

Which is cheaper? Replacement or rebuilding of a V8 engine?

You can find various V8 engines on the market, but not all of these will work with your car, so you need to make sure you know which one is right for you. Also, their cost is different.

The price of some models would be only $350, while for others you may have to pay $50,000 or even more. Another thing to consider is the advantages and disadvantages of rebuilding and replacing a V8 engine as the costs may vary.