One of the important components of a vehicle is the rear main seal as it prevents oil leaks. Over time this seal will damage and crack due to normal wear and tear. There may be a problem with the rear main seal if you notice oil stains underneath your truck or car.

How much does it cost to replace the rear main seal?

The amount of money you are going to spend in order to replace the rear main seal will be influenced by some factors such as the make and model of your car, whether it is it is a front or rear-wheel drive, and whether any other damages are discovered.

Plan on spending anywhere between $670 and $880 to replace your rear main seal, depending on the type of the vehicle and other factors.

The rear main seal replacement cost is greatly influenced by the labor fees. In general, you will have to pay only around $40 for the parts, while the labor costs are around  $720.

You might also like our articles about the cost of transmission front seal leak repair, oil pump replacement, or oil leak repair for your car.

The labor costs are influenced by some factors such as your geographical location, the make and model of your car, the place you take it for the repair, and whether it is a local mechanic or a dealership.

The price is also affected by the transmission type of your vehicle, whether it is automatic or manual. The costs are influenced by the time of the year as well. The costs of the service and goods get higher when the shops are very busy.

In the table below you will find the average costs of rear main seal replacement charged by some popular service providers.

The cost of the seal itself is influenced by the type of the seal and the make and model of your car. Even though the price of the parts represents a small percentage of the total price, it can affect the overall cost. For instance, you will need to purchase a premium seal that can withstand high temperatures for certain high-temperature engines. And these premium seals have a higher cost.

It is recommended to compare the sample costs of other similar trucks or cars in order to estimate the rear main seal replacement cost of your car.

As the costs are influenced by the make and model of the car, it would be helpful to see how much other people have paid to replace the rear main seal for their vehicle. In the table below you will find the average cost of rear main seal replacement for different types of cars.

Obviously, these estimates are available only for the part itself and the labor costs. The final cost will be affected by other factors like the extra work and repairs needed. In some situations, it would be a good idea to replace other components as well when replacing the rear main seal. For example, you will have to replace the oil pan gasket as well when you remove the oil pan. Some other repairs would include the replacement of the clutch components or of the front crank seal.

Most of the price for replacing the rear main seal is in labor expenses. However, if you want to replace this car part by yourself or if you want to buy the parts on your own, you will need to know how much you should budget for it.

Plan on spending around $30 for a new rear main seal. Though, the cost for certain cars may be anywhere between $45 and $55.

Expect to pay a premium price for an OEM rear main seal. However, you can find many aftermarket options at much more affordable costs for almost any make and model of car.

In general, you can purchase an entire set of engine seals at a good price. And it would be a good idea to replace more than one seal that is damaged as the different seals around the car engine wear out in time.

The price will be affected by the type of part you are going to buy and the make and model of the vehicle. For instance, the price of an aftermarket part will be lower compared to the price of an OEM or premium part.

In the table below you will find the average costs of the rear main seal for different types of vehicles.

The rear main seal (gasket) ensures the tightness between the engine and the oil bath, from where the oil is sucked by the pump. In general, these seals are made of PTFE rubber, rubber, Viton, synthetic rubber, silicone, or nitrile.

To replace the gasket, you must drain the oil and disassemble the bath. This is not always easy, as some car models require you to disassemble other parts or lift the engine. In order for the new gasket to seal properly, it is necessary to thoroughly clean the area and tighten all the torque screws (it is necessary to use a torque wrench).

Over time, the seal may become corroded, damaged, or weakened. This can become compromised due to harsh conditions or just normal wear and tear, the result being oil leaks. If you are running your vehicle with these oil leaks and do not repair it as soon as possible, you will have greater problems with your engine.

If you have a car with a manual transmission, you will notice oil leaks onto the clutch if the rear main seal is damaged. This can lead to other problems like chattering and slipping. You will have to go to a car service as soon as possible, regardless of where the oil is leaking from. 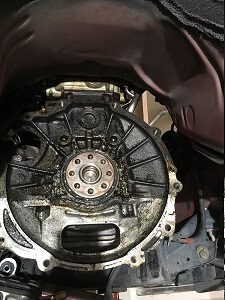 The main sign of a faulty rear main seal is the oil puddling underneath your vehicle. There is no doubt that the oil puddle in your driveway or garage indicates that the oil leaks from somewhere. But to find out which is the source of this leak you will have to take your car to a mechanic.

Your car may still lose oil even though there are no puddles underneath it. Another sign of a damaged rear main seal is the low oil level. In case the oil level is low and you have to fill it many times before the scheduled oil changes, then it means that the oil is leaking out somewhere.

There are situations when the oil is not leaking fast enough so you can notice puddles, but if you have to add oil often or you think that there is a leak park the car and let it run for around fifteen minutes.

After this, move the car and see if there are any oil stains underneath. In some cases, if you let the car idle you will be able to notice a small oil leak.

The main cause of a faulty rear main seal is the age of the vehicle. Over time these car parts wear out and need to be replaced.

Also, running the engine while the oil level is low will lead to damage to the rear main seal. It can harden and shrink as it dries out due to the lack of oil. The seal is very vulnerable to tears, cracks, and other problems once it hardens.

Some other things that can contribute to a rear main seal leak include the high mileage on the car, not running the engine for a long period of time, and the overheating engine (excessive heat).

The rear main seal can also wear out faster due to environmental or outside conditions. For instance, you may have more problems with the rear main seal in a car that is driven frequently on roads treated with ice.

A lot is not always better. If you fill the oil level past the max fill line then you may cause an oil leak. In case the Positive Crankcase Ventilation system fails, then the pressure buildup which may appear inside the engine can result in an oil leak.

In these situations, even though the oil leak appears in the same area it is not caused by the wear and tear of the rear main seal.

Why do I have to replace the rear main seal?

You will have to take your car to the mechanic as soon as possible if your rear main seal fails or leaks. You will have more problems with your vehicle and spend more money in the future if you keep ignoring this problem.

Even though in most situations this problem is not that urgent, you will need to fix it immediately so your car runs properly.

If there are oil leaks, the internal components of the engine such as the gears, belts, and hoses are not well lubricated and this will cause problems like overheating, grinding, and damage to the internal parts. A potential issue would also be premature wear and tear.

Moreover, the oil may get to other car components that normally do not have to be oiled and so other problems might appear. Also, the oil leaking can pose a fire hazard.

Your garage floor and driveway will get stained due to the oil puddles. Even more, the environment is affected by the leaking engine oil. This can be really dangerous to the water supply, plants, and animals.

You should repair the rear main seal anytime oil leaks appear in order to protect your car and the environment.

Can I repair the rear main seal by myself?

You will have to replace the rear main seal as soon as possible once this is damaged. Though, you can find some products on the market which claim to solve your problem without taking the car to a mechanic. These products use chemical formulas that work toward restoring the seal when it starts to get dried out and shrink.

Also, there are people who switch to a thicker oil weight in order to reduce the leaking. In general, it is not recommended to make these “repairs” by yourself and you should always talk with an experienced mechanic.

Typically, the rear main seal formulas are added to your engine’s crankcase, in the place where you pour the oil into your engine. After that, you will have to drive the car for a day or two and the leak should stop. Though, this fix is considered to be temporary.

To give an example of these formulas, you can find the Bar’s Leaks Main Seal Motor Oil Leak Repair on Amazon for around $25 or the Blue Devil Rear Main Sealer which costs around $30.

You can find many other brands of formulas on the market that say they do the same thing as these two. You can find more information about the available products if you visit your local automotive shop or with a quick web search.

Though, the majority of the mechanics recommend replacing the rear main seal if this is damaged. If your car loses too much oil from this part then the engine can get broken and you will have to spend much more to fix it. You may even have to replace the entire engine.

How to replace a rear main seal

It will never be a good sign to notice an oil leak below your car. But, in general, this can be something that can be repaired by any local mechanic. Most probably you will have to replace it if the source of the problem is the rear main seal.

Plan on spending anywhere between $670 and $2,000, or even more for replacing the rear main seal, depending on the make and model of your vehicle.