Bluefin tuna is a fine food, unlike what Americans find in commercial cans. This fish is extremely filling and cooks like quality beef. Bluefin tuna is preferred by gourmets for its special aroma, but also for its fine texture, the final dish being extremely fragrant. If cooked skillfully, bluefin tuna becomes a real delight for the taste buds.

How Much Does Bluefin Tuna Cost?

In general, the bluefin tuna cost is affected by factors such as the place where you are living, the place you buy it from, whether you purchase it locally, and the quality of the cuts.

Be prepared to pay anywhere between $18 and $50 per pound, if purchased from a local fresh fish market. In case you buy bluefin tuna from a local retailer, which already has it prepared, you may have to pay $32 to more than $175 per pound. From what we saw, the costs will depend on where the fish was harvested and where you buy it from. However, 99% of the time, you will see that it is almost impossible to find bluefin tuna online.

Bluefin tuna is considered a highly prized fish for raw dishes in Japan and almost 80% of this fish caught will be consumed in this country. As we researched the prices paid in Japan, we found that it is common to see purchases of more than $100,000. For example, in 2016, a Japanese sushi chain paid $117,000 for 441 pounds of bluefin tuna, resulting in a cost of almost $270 per pound. According to the buyers, this impressive price is justified by the high quality of the fish’s color, fat, and shape. Also, in 2013, 490 pounds of bluefin tuna caught in the same waters was sold for $1.8 million, making it the most expensive fish in history.

You can find sushi-grade bluefin tuna online at Giovanni’s Fish Market. It is available in spurts and costs around $35 per pound.

In case you find bluefin tuna at a local sushi restaurant, it would be sold at the price of $95 to more than $160 per piece.

According to a NOAA.gov guide, that showcases the wholesale market prices, in 2019, frozen bluefin tuna was sold for $22 to $54 per pound, while for fresh domestic bluefin tuna you would have to pay $15 to $80 per pound. 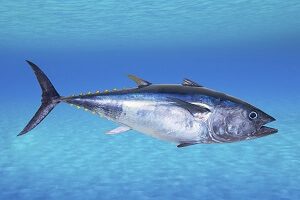 Bluefin tuna (Thunnus thynnus) can reach a length of 15 feet and weigh up to 1,320 pounds but are generally already 6.5 feet long when caught. This species feeds on gregarious fish, such as sardines and hake, but also on squid and crustaceans.

You might also like our articles on the cost of Ahi tuna, yellowfin tuna, or a tuna boat.

Bluefin belly fat is commonly known as “toro” and has a high-fat content. As a result, it has a pink-to-white color compared to the deep red color commonly seen in the center. There only five pounds of toro are produced by an average 1,000-pound bluefin tuna.

This fish is very appreciated as it is used for dishes such as sushi, sashimi, and nigiri-sushi, but also as Crudo and in tartar.

Bluefin tuna sold in the United States is caught in the waters of the Gulf of Alaska to Baja, California. Also, some markets source it from overseas, like Mexico and the Philippines.

Which are the additional costs?

In case you buy bluefin tuna online, most of the fisheries will charge a delivery fee, especially if you don’t meet the minimum purchasing requirements. Most of the orders must be delivered to your doorstep within 24 hours in order to preserve the filets’ freshness and due to the sensitivity of the delivery.

Bluefin tuna is prepared like quality beef, i.e., fried for a few minutes on each side and with the inside of the piece still red, “rare”.

Bluefin tuna can be seasoned with smoked salt and black pepper. This would be the ideal option to intensify the flavor of the fish. It is also recommended to season the bluefin tuna with lemon and olive oil.

The drink recommended by specialists for bluefin tuna is white wine, but an equally successful combination will be with rosé wine.

Bluefin tuna (Thunnus thynnus) is listed as Endangered* on the International Union for Conservation of Nature (IUCN) Red List.

All stocks are heavily exploited and it is estimated that much more bluefin tuna is caught than is officially reported. In the Mediterranean, the species is overexploited, but fishing pressure has decreased.

Even though they don’t taste exactly the same, there are much cheaper alternatives such as swordfish and yellowfin tuna.