The yellowfin tuna, a species of tropical fish that can weigh up to 400 pounds, is often marketed as “ahi” and inhabits the coastal waters near Hawaii.

The yellowfin is a delicious fish that’s full of protein, vitamins, and minerals. It also has an Omega-3 oil content which can be good for your health. Yellowfin get their name from the bright yellow color on their dorsal and back fins.

How much does yellowfin tuna cost per pound?

The price of yellowfin tuna will vary depending on the grade, where it was caught, and where you live. If it is from local fishermen then expect to pay $8-$15 per pound of yellowfin if not sushi quality.

The best-rated sushi-grade yellowfin tuna you will find on Amazon.com retails for close to $30 per pound, and this won’t include the shipping costs.

The yellowfin tuna is a versatile fish that can be sold fresh, frozen, or even canned. When served fresh at the market it will often have an individual weight of one to three pounds and include its date when it was caught on packaging as well as an expiration date.

If you’re looking to get your hands on some fresh yellowfin, there are two kinds of grades: sashimi and other. The quality of the “other” category is sometimes questionable so you have to be very careful when you cook it and while you eat it.

The fish is usually sold in loin form, unlike canned tuna. It has a mild flavor with dense meat similar to beef and the texture of your average steak. You will usually find it in the meats department.

There are a lot of reputable online shops that offer overnight shipping on fish and shellfish. Be careful, though – shipping fees typically cost around $10 to $25 or more depending on the retailer’s billing policy. 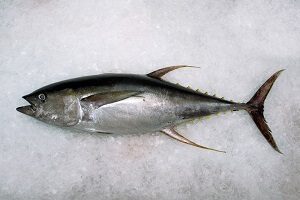 When buying yellowfin tuna, look for a cut that has been neatly trimmed and is free of fat. The flesh should be firm with no bones or tales present while the color should be dark red.

Purchasing online can be a risky business if you don’t know what you’re buying. Always make sure that the store you’re buying from has a good reputation and backs up their products by providing customers with refunds without hassle or questions asked should they encounter any problems.

The FDA has a recommendation of limiting your consumption of mercury-ridden fish to six ounces per week. Children, pregnant women, the elderly, or those that are sick should avoid eating yellowfin tuna altogether as it is unsafe for them.

Summertime means seafood, and this type of fish is a summer favorite. It tastes great grilled, broiled, pan-seared, or smoked; however, it can also be enjoyed raw with dipping sauce during the warmer months.

Store loins in the coldest section of your freezer to maintain freshness.

This type of tuna has a dark metallic body with blue accents and silverish scales on the belly. The fins are bright yellow.

The world record for the biggest yellowfin tuna was set in 2012, with a fish weighing 427 pounds. It’s best to remove its skin before serving or eating raw because the texture of cooked skin will not be enjoyable.

The main difference is the size, but they also have different flavors and tastes. Yellowfin tuna has less fat content than bluefin tuna which causes it to lack a strong “tuna” flavor. The yellowfin tuna is considerably smaller than the bluefin one.

The fat content in yellowfin tuna can be more noticeable when you pay attention to the filets. Due to this, bluefin pieces tend to command a higher price tag because they are leaner and healthier for consumption than their cheaper counterpart.

The appearance of bluefin and yellowfin tuna is also different. As explained by OnTheWater, the pectoral fin on a yellowfin reaches beyond the beginning of their second dorsal fin which is typically only about 40% as long. The tail fins are also quite distinct – with bluefins having darker blues colors for both their first and second dorsal fins while yellows will have more grays in them.

If buying from any retailer or fish market, special sales are often a great time to stock up on fresh fish. If you find the right deal, don’t be afraid of stocking your freezer because it freezes well.

The Cost of a Rack of Lamb

The Cost of Versa-Lok
Scroll to top
Posting....