It is said that jade can cure almost any disease but also that its beauty is overwhelming. The moss green of nephrite jade from China impresses with its luster and hardness.

In China, this green stone is highly prized and represents strength and luck. In this country, jade has been used for over 5,000 years in various practices as a talisman, but also as jewelry or for home decor.

Also in Asia, jade was considered a royal gem, being used mainly by noble families. Some historical writings say that the funeral garments of the great rulers of the past were made mostly of jade. Depending on its quality, this gemstone can be more expensive than gold. So how much is Jade worth?

Price of Jade per Ounce

The price of Jade was constant for many years, but took an incredible jump in the last two years, according to Forbes. In fact, the jade cost has more than doubled recently, resulting in a price of around $3,100 per ounce.

The quality of the jade stone will strongly dictate its price. Jade can occasionally reach even $3 million per carat, although its starting price is just around $5 per carat. When it comes to the price of jade per gram, this can range from $25 to $5,000. As for a kg of this rock, according to Myanmar Jade Auctions, it is anywhere between $25,000 and $5 million for rough, raw gemstones.

Jade worth in comparison to other metals

To get an idea about the value of jade, here are the costs of various precious metals.

These prices are pretty much constant for the last ten years as the highest cost for platinum and gold was almost $2,100 per ounce.

This makes us wonder why the cost of such a versatile and popular metal in the world of jewelry like gold remained almost the same in the last decade while the cost of jade almost doubled in only two years.

The reason why the jade value is so high

China’s massive industrial boom over the last 20 years stays behind the rapid growth of the cost of jade. This industrial development has led to the appearance of a large amount of newly rich people who wanted to show the world how valuable they are.

If some people choose to purchase expensive cars or designer clothes to prove their status, the Chinese are buying jade.

The Chinese interest in jade also attracted the interest of other rich people from all around the world. In fact, when trends appear among the ultra-rich they spread like wildfire.

Another reason why jade is so expensive is that it is a very hard gemstone, which makes it very durable and easy to carve.

If you look back into history, you can see that Jade was a symbol of rich even in the Neolithic era, as either an adornment or a blade. The cost of jade can easily go up because of the history behind it and the complexity of the work needed.

What is the most valuable jade type?

There are two types of jade in the world: jadeite and nephrite.

The most valuable type of jade is jadeite thanks to its rich color. It comes exclusively from Burma.

Imperial jade, known by experts as emerald-green jadeite or imperial jadeite, is highly valued and thus the most expensive type, especially in China. Its color is intense and bright green.

On the other hand, nephrite comes from western China and was used by the ancient Chinese a long time before jadeite jade became so appreciated. Moreover, the majority of the historical jade pieces are made of nephrite.

The cost of nephrite jade

Why is the cost of nephrite so low? 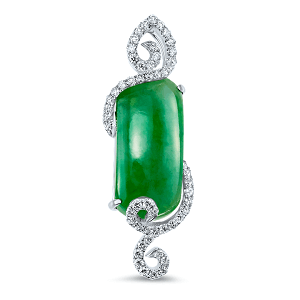 The price of nephrite is lower due to the fact that it can be easily found compared to jadeite. Also, the green jadeite is more expensive thanks to its vibrant imperial green color.

Even though jadeite is worth more due to its rarity and color, there are situations when nephrite pieces are more expensive. This is the case of jade pieces with historic and ancient significance.

For example, in 2016, Christie’s auctioned a piece of nephrite for $209,000. It had such a high value because it came from the Qin-Han dynasty, between the 3rd and 2nd centuries B.C.

It is understandable that ancient pieces of jade have a historical significance as these are found in general in Northern China and are more durable than jadeite. In the Neolithic period, even the sharpened blades were made of nephrite.

Is black jade a rare gemstone?

As with other colors, Jadeite black jade is the most expensive type of black jade.

It should have a deep black color, no transparency, but a smooth polished surface. It is quite rare, as not a lot of pieces have ever been found.

What is the most expensive piece of jade?

Even though the nephrite is so important from a historic point of view, the most expensive piece of jade is The Hutton-Mdivani Jadeite Necklace sold at an auction in 2014 by Sotheby’s for the price of $27.4 million. This jewelry is worth so much due to all of the history behind it.

One of the richest men in the world bought this necklace to offer to his American socialite daughter when she married a Jordanian Prince. The jewelry was proof of father-daughter love and a symbol of their status as well.

Cartier created this necklace with beads that have a diameter of 15 mm, which is surprising because, in general, jade can not be shaped in beads with a diameter larger than 10 mm. Nowadays, the necklace is back in The Cartier Collection.

Also, jade bangles are very expensive because it is very hard to shape jade in a large continuous circle. Moreover, in order to keep this shape jade has to be very strong.

Now that you found out some things about the value and importance of jade gemstones you may want a piece of jewelry or at least a hairpiece – it all depends on your budget.

This stone is also an ideal gift for lovers. For example, a dark green or vivid green jade ring can be a great gift to celebrate a special event. A jade pendant that is always worn on your chest can help you keep a positive energy and in addition, it looks very sophisticated.