Among the most famous users of inline 6-cylinder engines are Rolls Royce Silver Ghost, Bentley Speed six, Mercedes SSK, many Bugatti, and Jaguar models, and last but not least the specialist in L6 engines, BMW.

But, the 6.0 Powerstroke engine has been showing an increasing number of problems since 2003, most notably EGR system clogging and head gasket failures. Users are still experiencing these issues even though they were released some time ago.

There are still many people who have not thrown away their old engine and may need to rebuild it. If this is the case with you, then know that your project will likely require more than just replacement parts – there’s a lot of work involved.

How much does a 6.0 Powerstroke rebuild cost?

The average cost for rebuilding a 6.0 Powerstroke diesel engine is around $7,800. But, in case you want to rebuild this engine from a part kit, one kit will retail for almost $2,300.

Moreover, the labor costs would be around $1,400 on average. So, depending on how you choose to repair a 6.0 Powerstroke diesel engine to have it work properly again, whether by having the whole engine core or by getting a kit, be prepared to spend a maximum of $7,800.

On the other hand, you can have this job done by a professional and the costs would be a little bit higher. For the whole core engine plus labor you would pay around $9,000 and for the kit plus labor be prepared to pay around $3,600.

You might also like our articles about the cost of reboring an engine, engine camshaft replacement, or engine swap.

We are going to break down the costs and see how much it would cost using each of the two methods.

Firstly, below you will find the price estimates for some rebuild kits. 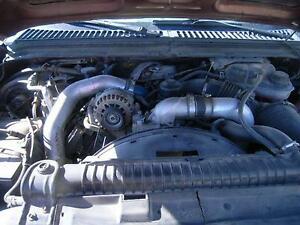 The Dynamic Diesel Performance and Machine Inc. Rebuild Kit is sold for almost $1,300 and it accommodates various Ford models, from 2003 to 2010. In this kit, you will get the rings, bearings, pistons, plugs, and other parts needed to rebuild the engine.

The Dynamic Diesel Performance and Machine Inc. Ultimate Rebuild Kit has an average price of $3,200. It is different from the other kits through the fact that it has a complete set of cylinder head castings, Oringed. Also, it can accommodate all Ford Powerstroke diesel engines released between 2003 and 2010.

The Swag Performance Parts 6.0L OEM ENGINE OVERHAUL KIT can be bought for almost $2,500 and it is compatible with standard 0.030 piston sizes. Also, it has a two years warranty.

In case you choose to buy the complete 6.0 Powerstroke diesel engine, you can find one on eBay for the average price of $7,800.

One of the major online retailers, Blackwater Engines retails the 6.0 Powerstroke diesel engine for $3,300.

Diesel Redemption charges a higher price for this type of engine, more precisely $5,700. It is compatible with Ford Powerstroke engines released between 2003 and 2010 and with other trucks as well.

You can buy a Powerstroke engine from J&K Engines for the price of almost $5,000, but these are compatible with only some E-series vans and Ford Super Duty trucks made between 2003 and 2007. Moreover, you would have to pay $620 more for a short block core or $780 for a long one.

When talking about the cost of labor to rebuild a 6.0 Powerstroke engine we must consider the amount of time needed to do it. There will be around 11 hours of paid labor required. The average cost per hour is around $130, resulting in a total cost of $1,430.

Ford has a reputation for building durable cars, and the Ford 6.0 Powerstroke engine is no exception to this trend. The estimated life expectancy of these powerful engines ranges from 200 to 300 thousand miles with most owners reporting that this is much more than what their car would ever need.

The best way to cut down on cost when rebuilding a 6.0 Powerstroke engine is by doing it yourself. You can find some online tutorials that show you how to do it.

But, for some models, it can be really hard to know what you need for auto repair work. Maybe you have a relative or friend who has been doing this their whole life, and they will want to help out at no cost.

Another way to save some money is by buying the engine kit or the entire engine with a one or two-year warranty. In case you will need to rebuild the engine during this time, it will be done for free by the manufacturer.

Before deciding which model to buy do some proper online research and compare the prices. Doing proper research, you may be able to find discounts and promotion codes at some retailers.