The Bombay cat breed was created in the past by Nikki Horner, a well-known cat breeder, who entered this field at the age of 16. Horner obtained the Bombay cat by mating American Shorthair, Burmese, Exotic, Himalayan, Persian, and Siamese award-winning cats.

Nikki Horner imagined and wanted the resulting breed of cat to look like a black Indian leopard, and named this work after the Indian city of Mumbai, which at the time (the 1950s) was called Bombay.

The Bombay cat is very calm and sociable and adapts well to different environments and family life. It likes to follow wherever its owners go.

It is interesting that they will accept the company of a dog in the apartment rather than the companion of other cats, on which they will try to exert their dominance.

How much does a Bombay cat cost?

When it comes to the value of a Bombay cat, there are many factors that can affect how much you will pay. For example, if your breeder is considered highly reputable and has show cats in their bloodline then the cat would be somewhere between $750 and $2,200, while an average breeders’ cat would be from $320 to $780. A retired show animal could cost $200 at most. However, each gender affects price differently; with female animals being slightly cheaper (around $500) while males tend to be worth around twice as much ($1,000).

But if you do find one, be ready to wait a few months. The breeds are so rare in the US that there is usually only one available at most at any given time and it takes some time before they can breed again due to their low numbers.

According to CatBreeedsList.com, the average cost of a Bombay cat can range from $400 to $650 depending on where you live and how much experience your breeder has had with this breed in the past.

A well-known breeder should provide documentation of their cat’s registration, a health guarantee on the animal as well as its vaccinations and medical records. They might even provide you with a travel crate for flights if necessary.

The cost of owning a cat is relatively low compared to other pets, but it can still range from $30-$40 per month if you factor in the recurring costs like food and shelter. The surprise/routine vet visits could also be costly depending on your cat’s health. However, any illness they have would likely lead to exceeding this price point as well.

If you are getting your cat shipped, be prepared to spend anywhere from $170 to $450 on the travel or shipping.

You might also like our articles about the cost of Nebelung cats, Persian cats, or Birman cats.

With its glossy-like coat, a rubber brush is highly recommended for removing any hair that may be loose and shedding. 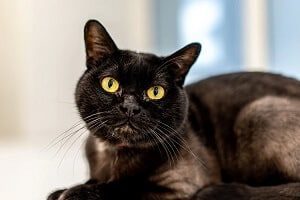 Bombay cats have a unique voice and are usually very vocal. They do not make a traditional “meow”, but rather a kind of whisper. They like to receive attention and need to be part of the family, which makes them great companions.

Bombay cat generally has a big appetite and it would be a very good idea to give it a fixed moderate portion. It is contraindicated for all food to remain at his disposal. It is important that the Bombay cat be fed the best quality dry food, supplemented from time to time with raw meat. However, raw meat poses a risk due to the danger of contamination.

The Bombay cat is generally healthy but can be affected by the following problems: hypertrophic heart disease, excessive tearing of the eyes, and shortness of breath due to a short nose.

The average life expectancy of the Bombay cat is over 15 years.

The Bombay cat has short, shiny fur that sheds in moderate quantities. It is easy to maintain, requiring only a weekly brushing. If you use a harder brush, it will enjoy the massage its body receives.

If you have allergies, this cat is definitely the one for you as it produces very little dander and it’s easy to clean.

Another aspect that is good to keep in mind when caring for your Bombay cat is shortening her nails, usually weekly, and cleaning them only when they look dirty. Use a cleaning solution recommended by your vet.

They reach reproductive maturity relatively quickly and, therefore, young specimens must be castrated fairly early, between 6 and 9 months. On the other hand, their full physical maturation is not fast, some cats reaching fully developed muscles only at the age of 2 years.

The Bombay cat is very smart. Stimulate its imagination and keep it interested in life by teaching it to do tricks and providing it with complex toys.

If you’re looking for a cat that closely resembles the Bombay breed, consider adoption rather than purchasing from a private seller. You could find one at your local shelter, plus it’s only going to cost you an adoption fee which can be different by city and state. Aside from saving yourself some serious money here, this is also a great way of helping out these homeless cats with finding forever homes for them.

If you are interested in adopting a Bombay cat, it would be best to check your local area for rescues that only home these cats.

The Cost of Plywood
Scroll to top