A llama is a kind of animal that is typically used as a pack animal; nevertheless, there are some cultures that could consume its meat. However in the United States, many are only as livestock.

Llamas are terrific animals for working due to the fact that they can take about 30 percent of their body weight for as much as 8 miles. Although they look pretty gentle, llamas are also utilized as a guard for animals. They can safeguard sheep from predators such as coyotes and other dangers. Llamas can mature to 6 feet high, weigh 450 pounds, and will look like a combination between a camel and a sheep.

Just how much does a llama cost?

Usually, a llama can cost anywhere from $300 to as much as $5,000. A llama without any training, for instance, can be just $400 to $900 while a llama utilized for reproducing or weaning can have a price that just starts at $1,500. The general cost of a llama will ultimately depend upon the age, its character, wool quality gender, its history, its size, and where it’s acquired from.

Llama Nation, an online classified site, has 400+ listings at the time of this writing, with rates differing anywhere from $350 to $3,500. About 70 percent of the listings, nevertheless, are less than $750.

Shangri Llamas, situated in Callaway, Virginia, has several listings up on their site. The majority of the llamas, either offered in the past or currently for sale, are in the $600 to $1,500 price range.

What is going to be included in the cost?

A trusted breeder ought to include some sort of warranty, updated vaccinations, a deworming, any medical history, nail cutting, sheering, and aftercare assistance if you ever required it.

Unless a llama is being utilized as a guard animal, they should not be left alone due to their herding impulses. With that being noted, if you wish to purchase a llama, be ready to adopt a minimum of 2 to 3. If you don’t do so, it can lead to some very aggressive habits.

You might also like our articles about the cost of a monkey, an emu bird, and a cheetah.

A barn or three-sided shelter, if you do not have one constructed already, will be required to keep them out of the sun or rain. This shed must be big enough to enable each llama to walk around easily and provide them some space. The majority of the time, llamas will walk around outdoors unless it’s too hot. The biggest issue, as Gala Online points out, will be the summertime when they will try to keep cool. If you have not constructed a shed yet, think about including ridge vents to enable the hot air to escape, or if you are able to, include electrical energy to run a fan. 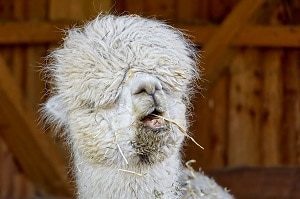 The shelter is just part of the llama’s living expenses; they will also require appropriate fencing. At a minimum, the fence has to be safe, properly secured, and made from either board or split rail. These animals tend to stay away from fencing so there’s no stress overaggressive behavior.

When it comes to feeding, the things are pretty mixed as owners have different opinions about nutrition and feeding. 2 animals, typically, can cost about $350 annually to feed. This would consist of the pellets and about 6 months’ worth of feeding hay. If allowing them to feed in a pasture, an acre can feed about 3 to 4 llamas.

The majority of the time, llamas will not require medical attention; nevertheless, males with fighting teeth might need to have them cut off to prevent them from becoming damaging to other llamas in the pen. Each month, or every 3 months if you are living in a rockier terrain, the toenails will have to be cut, but this can be done by yourself if you know how it works. Deworming, just like for any other animal, has to be done by a local vet, along with vaccinations such as a rabies shot.

Shipment, if needed, can be an extra expense if you need the seller to do it personally.

As long as it is healthy, a llama can live 15 to 20 years generally.

Llamas can be available in all shapes, colors, and sizes, however, the typical llama will weigh somewhere between 250 to 425 pounds and reach heights of 4 to 6 feet high.

Llamas can spit; nevertheless, they will just do so to keep other llamas at bay or to develop their area to keep a pecking order. A mistreated llama, according to graustarkllamas, might spit at anything it considers a threat.

Any differences between llamas and alpacas?

First off, the ears. The ears of an alpaca will be much shorter in shape while the ones of llamas will be a lot longer.

Then, the face. If you look very closely at a llamas’ face, it will be longer, while an alpaca will have more of a “smashed” face.

Also, their hair. The hair of an alpaca will produce finer fibers than a llama. An alpaca will also produce more fleece in various colors.

The purpose too. Alpacas have actually been known to be reproduced for fiber, and in some countries, even for meat. Llamas, on the other hand, will be mostly utilized as either a pack animal or for meat.

And finally, their size. Alpacas, usually, will weigh as much as 175 pounds, whereas a llama can be much heavier, typically weighing more than 400 pounds. The very same can be noted about the heights, as an alpaca can stand about 36 inches high, while a llama will be 10 inches taller.

See if any llama rescue centers can be found in your geographical area. If so, this is an excellent way to adopt a llama that needs a family, for a lot less than buying from a private breeder. Also, a regional llama auction, if available, can always net some good offers.