You surely heard about Tweety the Canary, the cute yellow bird in the cartoon that managed to fool the “kitten” so gracefully. The bird actually avoids cats in real life. It can be of other colors, but its charm and grace are really undeniable.

How Much Do Canaries Cost?

The costs of Canaries depend on some factors such as the gender of the bird, age, plumage, where you buy it from, and breed line.

You can find many different types of canaries at Birds Express in California with prices starting from $85 and going up to $360.

There is a wide variety of canary types at Finch Farm in Washington with costs anywhere between $100 and $390.

Also, LL Cages in Washington has many different types of canaries for sale with prices anywhere between $90 and $110.

If you are not able to purchase a canary from a local shop you can buy it online, but it will result in higher expenses.

For example, LL Cages charges a flat rate of around $110 for shipping. Also, Birds Express has shipping fees starting at $160 plus a box fee of $25 with a minimum order of $255.

When talking about the gender of the canary, expect to pay a higher price for males because they sing. According to the breeders, the best time to establish the gender of the bird is fall because during this time of the year only the males sing.

Canaries can have many different colors like black and yellow, orange, green and yellow, red, and many more combinations. Colors that are not so common will affect the cost.

Besides the color, the plumage may be different as there are birds that have crested heads or feathered feet. For example, there are canaries with body plumage which makes them look like small feather dusters for which you will have to pay a higher price.

Also, canaries have different song types and they can be taught to sing certain tunes. Expect to pay more for a show champion song canary.

Canary cost is influenced by the breed line and the show awards. So, if you want o purchase a canary from a particular champion breed line expect to pay a higher price.

The canaries are divided into three categories: we have the ones grown for color (the brown canary, the one from England), the canaries grown for their special song (especially the American one), and the canary grown for shape (usually the Scottish or Belgian canary).

Since canaries are divided into three groups, you have to decide whether you want a canary for its soft song, beautiful color, or interesting appearance. Males usually sing better than females, but they do not sing with the same intensity all year round. Thus, the canaries stop singing during the shedding period, but sometimes without clear reasons. 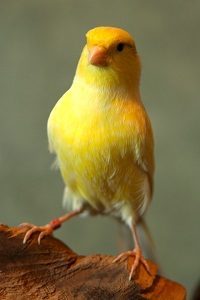 Although canaries are small birds, they definitely need a lot of space. They are very mobile animals, so the bigger their cage – the better. Ideally, the canary cage should be parallelepiped in the size of min. 24x18x18 inches. The important thing is to have small gaps between the bars of a maximum of ½ inches – so that the canary does not accidentally get stuck. The bottom of the cage should be sprinkled with special sand for the canary, which is also used for bathing. A container of water should be placed in it – also for bathing, and as a place to keep and grind the claws, perches should be installed. Of course, you also need to provide them with access to fresh water and seeds.

So, you should budget anywhere between $60 and $135 for the cage and around $8 for a pair of natural wood perches. Also, for the bathing bowl, you will spend around $8.

On average, a canary lives about 10 years and is rarely sick. The most common conditions are eye disease and skin keratosis. The canary can also be infested with external parasites and fungi. Another dangerous condition is diarrhea. Most canary diseases are noticed by changes in the behavior of the bird – if it becomes depressed, does not drink, does not eat, or does not take care of its feathers – it is best to go to the vet immediately. You should budget around $60 for a regular health exam and at the very least $110 for emergencies and treatment.

The canary needs a varied diet to maintain its health. Seed mixtures sold in specialty stores, consisting of millet, rapeseed, hemp, etc. are recommended. Its food can be supplemented with green leafy vegetables (salad, spinach, broccoli, etc.), boiled egg yolk, carrot leaves. The bird will not refuse pieces of melons, apples, or grapes. Expect to pay around $38 for a 10-lb bag of extra small pelleted food blend.

Vitamin supplements are also recommended, especially in the case of a diet consisting mainly of seed mixtures. So, for two small-size cuttlebones, which are a great source of calcium, you will have to pay anywhere between $4 and $6.

A very valuable use of the canaries was to warn the people working in the mine. Due to the fact that these birds are very sensitive to odors, they detected gas leaks very quickly. So the birds either fell into a daze or even died, and the mineworkers withdrew. In England, canaries were used for this purpose until 1987.

Most canaries are somewhat shy. Compared to older birds, they do not like to be held in your hands. However, canaries are charming birds and interact with you from the comfort of the large cage in which they are kept.

Compared to other pets, the canary will not imitate your voice but will respond in its own language when you talk to it. Be gentle with a canary because it will pinch you if it feels stressed or threatened.

Consider purchasing a partner for your canary if you stay home for less than 5 hours a day. The behavior and sociability of the canary differ from those of the parrots, but the canaries are domesticated, and when they fly they know how to land on the owner’s shoulder or on the table. When we release them, we need to make sure that the doors and windows are tightly closed. If the weather is nice, canaries like to stay outdoors, but be sure to place the cage in a place away from birds of prey or direct sunlight, preferably on a higher surface.