Saffron is used to add a distinctive aroma, flavor, and color to both sweet and savory dishes. This special spice is derived from the red stigmas of a particular saffron flower, Crocus sativus, which grows in some of the wildest parts of the world and must be hand-picked with the utmost care.

Only three strands can be picked from each flower at a time, meaning that 1 gram of saffron requires 150 saffron flowers – it is said to be worth more than its weight in gold.

How Much Does Saffron Cost?

The cost of saffron is greatly affected by its quality. You should be prepared to pay, on average, anywhere between $7 and $35 per pack.

By the pound, saffron has the highest price on the market. As more than 150,000 flowers are necessary to produce a kg, the cost of saffron would start at around $550 and go up to $4,800 per pound.

According to CNN Money, saffron is the world’s most expensive spice, having a price of $1,000 or even more.

Also, according to the UCC.edu website, the retail price for saffron may be as high as $5,010 per pound or $320 per ounce.

Saffron is cultivated especially in Iran, Greece, and Spain, and Iran provides over 90% of the world’s production of this spice. The best type of saffron originates from Greece, where it has been cultivated for thousands of years, since the Cretan civilization, when it was considered the flower of fertility and knowledge. Some historical sources say that the Cretan priestesses tried to keep the saffron plant a secret, but it was discovered and Iran, India, and China began to produce more than Greece.

You might also like our articles on the cost of basil, garlic, and the most expensive foods in the world.

Saffron can have different colors: from yellow to red, and in Greek mythology, it was said that it is the embodiment of the goddess of the dawn, due to its special colors.

The aroma of saffron is often described by connoisseurs as reminiscent of honey with grassy or hay-like notes. It has a bright yellow-orange color that immediately colors dishes.

The spice is available as whole threads or in powder form. The saffron threads retain their flavor better and it is much easier to appreciate the quality of the spice in this form.

Saffron is so expensive because filaments from approximately 150,000 flowers must be harvested to produce one kilogram of the spice.

How to grow saffron? 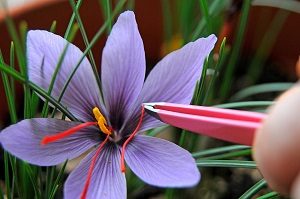 To grow saffron, you first need Crocus sativus bulbs and a piece of land with clay or siliceous soil. For instance, you can find bulbs on Amazon, at the cost of around $1 each. Also, reputable online nurseries sell Crocus bulbs. The climatic conditions specific to the chosen area are also very important; saffron is a heat-loving plant, which does not tolerate the cold and excessive humidity that can cause the phenomenon of bulb rot.

Instead, you must pay special attention to irrigation, and in case there are drier periods, ensure the culture gets the necessary water.

The best time to plant bulbs is autumn, more precisely mid-August, to the end of September. The flowers bloom only once a year and only for a short time (approximately 2 weeks), their picking being carried out between mid-October and the beginning of November. Since they are frail and wither quickly, they are picked before sunrise, in the early hours of the morning.

After picking the flowers, the manual extraction of the stigmas (the saffron threads) follows, each one having 3 such filaments. Due to their water content, they are later dried in the oven or even in the sun, resulting in the final form of the spice.

How is saffron stored?

Saffron must be kept away from light and extreme temperatures, well-closed, preferably in a glass container.

The International Organization for Standardization imposes the parameters that measure the intensity of the pigment of saffron filaments: the more intense, the more valuable. The value scale is worth taking into account, especially when the methods of forgery are so vast.

Saffron consists of the three pistils of the crocus. These are delicate, similar to filaments, each 2.5-4 cm long. They have an intense reddish-orange color, which is uniform in good-quality saffron. Saffron with white stripes or discolored spots is of inferior quality, and when white threads appear in the powder, this is a sign of counterfeiting.

To know if the saffron is genuine, you can dip a small piece in warm water or milk. If the liquid changes color immediately, it is a fake. Genuine saffron takes about 10 to 15 minutes of soaking time before it colors the water.

Since saffron’s flavor is only released when it’s heated, but it shouldn’t be heated too much, here is a handy tip to help you get the most flavor out of this precious spice. Grind the saffron in a mortar and pestle or between your fingers and soak them in a little water or milk. This saffron reduction can be added to the dish when it is almost ready.

The therapeutic properties of saffron

In addition to the special taste it gives to dishes, saffron also has certain therapeutic properties, among which:

It should also be mentioned that saffron should be avoided by pregnant people because it can cause abortion. In addition, the consumption of more than two grams of saffron per day is not indicated!

It is highly recommended to purchase saffron in bulk if you know that you are cooking a lot. The more you buy at once, the more you can save.

You may be able to find cheaper saffron, but you should know that its quality is also lower.

According to the SeriousEats.com website, saffron that costs only a few dollars per ounce is of poor quality. They say that the best choice is Spanish and Iranian saffron.

Take into consideration purchasing other alternative spices such as safflower, annatto seeds, turmeric, and marigold blossoms. All of these have a similar taste and come at a fraction of the price.