Tim Hortons, known globally as Tim Horton’s Cafe and Bakeshop, Inc. is a Canadian fast-casual restaurant famous for its coffee and doughnuts. Even though their main specialty is coffee, Tim Hortons has many other food items on their menu, like breakfast items, sandwiches, salads, bread, and many more.

The prices charged by Tim Horton restaurants are much higher than those charged by other regular fast-food restaurants in the industry. In the table below you will find the latest Tim Hortons menu prices.

The Tim Hortons company was founded by the Jim Charade businessman and by the famous Canadian hockey player Tim Horton, in 1964. Their first restaurant was located in Hamilton, Ontario, and was called Tim Horton Donuts at that time. A few years later it was abbreviated to “Tim Horton’s” and after that, the possessive apostrophe was removed and remained “Tim Hortons”.

You might also like our articles on the prices for the items on the menus of Kneaders Bakery and Cafe, Einstein Bros, or Baskin Robbins.

In 1974 Tim Horton died and Joyce purchased the Horton family’s shares for $1 million and took over as sole owner of the existing chain of 40 locations. He expanded the chain aggressively and quickly in both product and geography selection.

The great success and expansion of the Tim Hortons chain have brought significant changes to the Canadian doughnuts and coffee restaurant market. Many small chains and independent doughnut shops were driven out of business by this chain. 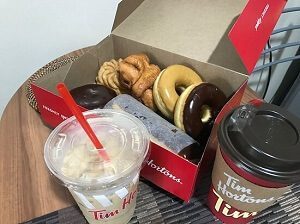 As we already mentioned at the beginning of the article, Tim Hortons menu prices are a little bit high but the food served here is worth every penny. The doughnuts are mouthwatering and have a perfect balance of form and taste. Moreover, the cold beverages and coffee are finely handcrafted so you will want to come back again and again for that taste.

Sometimes you may have to wait a little longer for your order because of the long line of clients. But the staff is friendly and accommodating and will prepare your order as fast as possible.

The majority of the Tim Hortons restaurants are designed to have a modern architectural style with a slight classic influence. Large groups of customers can be seated in the dining area.

At what time does Tim Hortons open?

In general, Tim Hortons opens at 06:00 a.m. every day, but it depends on the day of the week and location. It is recommended to verify this information on their official website.

At what time does Tim Hortons close?

Most of the Tim Hortons locations close at 10:00 p.m. from Monday until Sunday. However, it depends on the location and day of the week, so you better check it on their official website.

Yes, Tim Hortons does serve breakfast all day. However, it is recommended to verify it at the location you want to go to.

Does Tim Hortons have healthy sandwiches?

Yes, Tim Hortons has healthy sandwiches on its menu. It is recommended to try their breakfast sandwiches served with their whole-wheat English muffins.

Which are the healthiest bagels at Tim Hortons?

Tim Hortons serves a wide variety of healthy bagels and some of them include the Jalapeno Asiago Mozzarella Bagel and the Roasted Garlic & Cheese Bagel.

What is a healthy breakfast item at Tim Hortons?

One of the healthy breakfast items at Tim Hortons is their vanilla Greek yogurt. This contains almond granola and mixed berries.

What type of milk does Tim Hortons use?

Most of the Tim Hortons beverages are made with almond milk.

Which is the most famous bagel at Tim Hortons?

The B.E.L.T. bagel is the most famous bagel at Tim Hortons.

What is included in the B.E.L.T. bagel?

The B.E.L.T. bagel is made of cheese, bacon, tomato, eggs, and lettuce.