The desire to achieve superiority in racing has led car manufacturers to look for ways to improve the performance of a standard internal combustion engine without drastic interventions in its design. And the most effective solution was to introduce an additional air blower, due to which a larger volume enters the cylinders and the efficiency of the unit increases.

Those who have driven a turbine engine car at least once in their lifetime have noticed that until the engine spins at a certain speed, the dynamics of such a car are limited. But as soon as the turbo starts running, the engine reaction increases. The inertia of these installations led the engineers to think about creating another modification of the turbines. Turbocharging began to be used to reduce fuel consumption, but at the same time to increase the performance of the internal combustion engine. As a further evolution of the turbo for engines, the Twin Turbo system appeared.

How Much Does It Cost to Install a Twin Turbo?

In the table below you will find the price estimates for twin-turbo installation for different types of cars.

As it is clearly seen, the prices depend on the car’s type. That’s why it is recommended to get price offers from a bunch of mechanics before making an appointment.

Turbocharged engines have become standard engines for modern cars. Both diesel and petrol engines are turbocharged. The turbocharger is a device that allows both the increase of the specific power of heat engines and the reduced consumption and pollutant emissions.

The twin-turbo system is a sequential supercharging system, which is equipped with two turbochargers, a larger one and a smaller one. The small one works at lower speeds and the big one works at higher speeds, so the lag is much smaller and the maximum power is higher. The circuit between the two turbochargers is separated by a valve. This type of supercharger uses turbochargers in parallel and is usually equipped on engines with V-cylinders but also on those with a larger number of in-line cylinders (6 cylinders, BMW).

The time needed to install a twin-turbo depends on the mechanic’s experience, the number of people working on it, and on whether or not the mechanics take any breaks. If there will be no breaks, the whole process should be done in five to ten hours.

This job requires a lot of critical work and precision as there is extra tubing and wiring installed as well, in order for everything to work properly.

The operating principle of the supercharger for twin-turbo engines is the same as that of a single turbocharged engine. In the case of a 12-cylinder V-engine, a turbocharger unit is used to power a 6-cylinder bench. The advantages of using this supercharging solution, compared to the solution of a single turbocharger, are multiple: the length of the intake circuit pipes decreases, the turbochargers have lower geometry, mass, and inertia and for this reason, the response to accelerations is faster.

BMW also uses twin-turbo technology on in-line 6-cylinder engines. Thus, one turbocharger supplies 3 engine cylinders of compressed air. The advantages are the same, the turbochargers are smaller and the air intake circuit simplified, the response to accelerations being improved.

In most cases, a parallel type of twin turbocharger is used in engines with a V-shaped cylindrical body design. The device of such a system is as follows: A turbine is required for each section of the cylinder. They have the same dimensions and also run parallel to each other. Exhaust gases are evenly distributed in the exhaust tract and go to each turbocharger in equal amounts. These mechanisms work in the same way as an in-line engine with a turbine. The only difference is that this type of turbo has two identical over-loaders, but the air in each of them is not distributed in sections but is constantly injected into the common tract of the intake system.

You might also like our articles about the cost of an engine swap, muffler delete, or exhaust installation.

Biturbo engines use two sets of turbochargers to compress the air in two stages. These engines are also called engines with sequential (serial) turbochargers because the compressed air, which enters the cylinders, passes through the two compressors, being compressed twice.

The twin-scroll turbo system solves many of the shortcomings of single-scroll turbo systems by separating those cylinders whose pulses of exhaust gas interfere with each other. As a concept, similar to grouping cylinders in the case of naturally aspirated engines, twin-scroll groups the cylinders on one side of the turbine intake chamber so that the kinetic energy resulting from burning fuel is more efficiently captured by the turbine.

There are engines called quad turbochargers that use 4 turbocharger groups. An example of this is the engine that equips the Bugatti EB110, 3.5 liters, with 12 cylinders in V. This engine drives 4 turbochargers in parallel, two on each 6-cylinder bench. 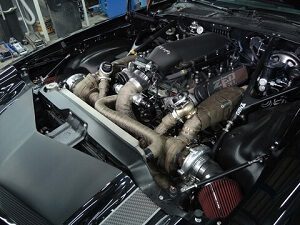 The Twin-Turbo and BiTurbo systems are easily confused by drivers.

The parallel supercharging system uses two turbochargers of the same size, identical in all aspects. In this system each turbine has its share of cylinders, for example in a V8 engine, each turbine will be driven by the exhaust gases of 4 cylinders. This system is called BiTurbo when the turbines are identical.

The German term TwinPower Turbo has also been applied to single turbocharged engines with two exhaust outlets to the turbine. These are called twin-scroll and help the turbocompressor to move much easier, even if the speed intervals are different.

As presented above, the Twin-Turbo is more elastic and develops power more linearly and over a higher speed range, while the BiTurbo system develops a higher maximum power, but at the same time, the power is available only after 2500 rpm. Under this speed the engine develops power, but not so much, it will be lazier until the turbines start to put pressure. Maintenance on cars equipped with this system is a bit higher because more oil enters the entire installation, but it is not such a big difference.

The advantages of this supercharging system are obvious: at low speeds, the high-pressure turbocharger group is used because it has smaller dimensions and implicitly less inertia (faster response to accelerations); as the engine speed increases, the larger low-pressure turbocharger unit compresses the air to the maximum boost pressure.

When looking for the right type of twin-turbo for your car you must take into consideration your needs. For example, parallel-twin turbos are the right choice for a basic twin-turbo setup, while sequential twin turbos are recommended to those who want less lag and higher boost pressure. Also, if you have a diesel engine, the staged turbocharging is the best and the twin-scroll turbos give the power of a six-cylinder engine to the four-cylinder engine.

It is not recommended to install the twin turbo yourself as it is a very complex job and requires a lot of attention. So, you have to let a mechanic perform this job.