Besides biscuits, Bicuitville Fresh Southern also offers on its menu sweets, sides, platters, sandwiches, and various breakfast options. Even though breakfast is the highlight of this eatery, the chain expanded over time and now offers a lunch menu, as well.

In the table below you will find the latest Biscuitville Fresh Southern menu prices, so you can get an idea about how much you should budget for eating and drinking there.

Biscuitville Fresh Southern has a history of more than fifty years. This business started with a bread store located in Burlington, North Carolina. Initially, the store was called Mountainbrook Fresh Bread and Milk and was founded by Maurice Jennings in 1966. Eventually, he started to make and sell pizza and changed the name of the restaurant to Pizzaville.

In 1972 Maurice Jennings already opened six Pizzaville locations in Virginia and North Carolina. But he wanted to increase business income and took the decision to sell biscuits in the morning for breakfast. So, The Jennings family joined their efforts and developed the biscuit recipe. The biscuits were really delicious and became very popular among the customers. Eventually, more biscuits were sold than pizzas.

You might also like our articles on the prices you will find on the menus of Caribou Coffee, First Watch, or Cracker Barrel.

The company decided to open the first biscuit-only location in Danville, Virginia, called Biscuitville, due to this great popularity with freshly-baked biscuits. Eventually, all the Pizzaville restaurants were transformed into Biscuitville stores.

By 1982, 25 Biscuitville locations were opened and at each of these served freshly-made biscuits prepared on-site.

In 1966 the reins of the business were taken over by Maurice Jennings’s son, Burney Jennings. So, Biscuitville Fresh Southern remained a privately held and family-owned restaurant chain.

Over time, the Biscuitville Fresh Southern chain was very successful and expanded vastly. For instance, in 2013 the first college campus location was opened at Elon University’s dining hall.

Nowadays, there are more than 65 family-owned Biscuitville Fresh Southern locations in Southern Virginia and North Carolina, including the Madison Heights, Martinsville, and Lynchburg stores in Virginia, and the Chapel Hill, Indian Trail, Greensboro, Clayton, and Durham stores in North Carolina. 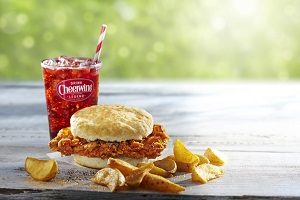 The breakfast platters are priced from $6 to $9 and include bacon, sausage, ultimate platter, and country ham. These are served with a hash brown or home-style gravy, two eggs, the client’s choice of grits, and a biscuit. Low-carb egg platters are also available. For the pancake stack, you will have to pay $5 to $7. Also, their menu includes breakfast sides which cost anywhere between $3 and $5. Some of these options include oatmeal, country fries, honey buns, grits, toast sticks, hash browns, muffins, and home-style gravy.

Biscuitville Fresh Southern lunch menu includes items such as homestyle chicken breast tenders, grilled chicken bacon ranch, and cackalacky chop.  Plan on spending anywhere between $7 and $11 on one of these lunch options.

The food served at Biscuitville Fresh Southern is mouthwatering and the service is excellent, and most probably this is what keeps the clients coming back for more. Due to the fast-casual nature of this restaurant reservations are not necessary.

At what time does Biscuitville Fresh Southern open?

In general, Biscuitville Fresh Southern opens at 05:30 a.m. Monday through Saturday and at 06:00 a.m. on Sunday. However, it may vary from one location to another and it is recommended to visit the company’s official website to see which are the opening hours of the location you are interested in.

At what time does Biscuitville Fresh Southern close?

Usually, Biscuitville Fresh Southern closes at 02:00 p.m. every day. But again, it depends on the location and you should find out more about this by visiting the restaurant’s official website.

What is Biscuitville Fresh Southern best known for?

Biscuitville Fresh Southern is famous for its freshly-made biscuits prepared from scratch every fifteen minutes.

What brand of sausages does Biscuitville Fresh Southern use?

What type of oil does Biscuitville Fresh Southern use?