International House of Pancakes or simply IHOP is an American multinational restaurant chain specialized in American breakfast meals, with more than 1,840 locations all over the world. Besides the breakfast food items, at IHOP you can find many options for lunch and dinner such as chicken baskets, burgers, ribs, and sandwiches.

Some of the most popular food items from the IHOP menu include the omelet, the French toast, and the crepes.

In the table below you will find the latest IHOP menu prices.

International House of Pancakes was founded in 1958 by Albers Kallis, Al Lapin, and Jerry Lapin, with the help of William Kaye and Sherwood Rosenberg. The first IHOP restaurant was located on 4301 W. Riverside Drive in Toluca Lake, Los Angeles, California.

You might also like our articles on the cost of the items on the menus of Applebee’s, Five Guys, or The Melting Pot.

Jerry Lapin and his brother Al were ready to open their first IHOP restaurant after perfecting their pancake recipe in their mother’s kitchen. They needed $25,000 to open the original location.

The restaurant chain shortened its name to “IHOP” in 1973 due to marketing reasons and at that time used a carton kangaroo in their commercials.

In the 1980s IHOP’s breakfast menu expanded and included standard lunch and dinner food items that could be found in other similar restaurant chains like Denny’s and Sambo’s. Also, starting with 1983 IHOP went through a restructuring process, closing all the locations which were not profitable and renovating those which remained. Some of the updates included splitting the kitchen into two, adding more seating, and changing the décor. Though, the ovens were not included in the renovation in order to keep the costs low.

IHOP Corp. bought Applebee’s International Inc. for $2.04 billion in 2007. At that time, these two brands together had more than 3,250 restaurants, which made IHOP the largest full-service restaurant company in the world.

IHOP’s menu got a complete makeover in 2013 which helped the company to increase its sales by 3.6% in the following months. The new menu consisted of clearly divided sections and many mouth-watering photos of the meals. 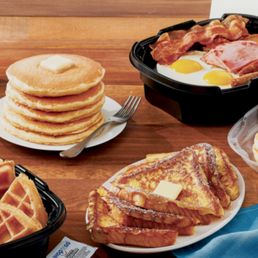 IHOP restaurant was diner-inspired, so the seating in every location is pretty generous. Many tables can seat at least four clients. But there are also more intimate options for small groups of guests.

People described the food served at IHOP as being delicious and warm. In general, they are coming back for the pancakes, but they enjoy some other meals as well.

If you are going for the first time to IHOP and you don’t know what to order, you should try the International Pancake Combo. Some other recommendations include the Buttermilk Biscuit and Gravy and the Southwest Scramble.

There are also very many positive reviews for the customer service at the IHOP restaurants. The staff is friendly and able to handle the client’s requests in an efficient way.

At what time does IHOP open?

Most of the IHOP restaurants are open 24 hours, 7 days a week, but there are some locations that open at 07:00 a.m. every day. It is recommended to verify the schedule of the location you are interested in on their official website.

At what time does IHOP close?

As we already mentioned, in general, IHOP is open 24 hours, 7 days a week, but there are locations that close at 10:00 p.m. You better check the operating hours of the restaurant you are interested in on their official website.

What does IHOP stand for?

IHOP is the acronym for the International House of Pancakes.

IHOP is owned by Dine Brands Global company, which formed after the IHOP’s acquisition of Applebee’s.

How does IHOP create flawless pancakes every time?

According to Marie Grimm, the vice president of culinary innovation, IHOP does not use oil or butter on its griddles, which may create a lacy, webbed look. Instead, the griddles are set to 350 degrees F to make an evenly cooked, golden-brown pancake.